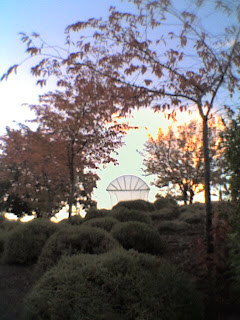 April is autumn in New Zealand and no where is that more prominently felt in such grand scale than in central Otago.

To coincide with all that autumn entails, every 2 years there is an arts festival in Wanaka. The lake town which in recent times has been the haunt of all things old, white and rich or young, frugal ,white, playful and foreign ie a retirement town for the well to do or a stop on the kiwi experience for visiting backpackers. However thanks to the directorship of festival main man Philip Tremewen who once again sought to bring a polynesian influence to the arts festival since its inauguration last time, it played host to Michel Tuffrey, Lonnie Hutchinson and Wi Taepa. 3 prominent New Zealand artists of polynesian extraction making their marks in various artistic disciplines. Tuffrey in multimedia, Hutchinson in black paper stenciling and Taepa in clay. Also active in the festival were Anton Carter (antsman) Mike Bridgeman (mike busy) Oscar Kightley (brotown) and Riki Gooch (trinity roots) now a wanaka resident

Wanaka in Kaitahu dialect (Kaitahu of course being the dominant tribe in the sth island) is wananga as the ng sound is replaced with the k, hence kaitahu not ngai tahu etc and means a place of higher learning or a gathering of peoples to learn. With that in mind to stand on the anzac memorial hillock, irie eyed with the bros talking shit and overlooking the town and the lake, it is not hard to imagine it's name being given for the many tohunga (maori equivalent of shaman or master craftsman)who undertook to gather in this magical place to discuss and share the knowledge of the elders for future generations.

It seems then as no coincidence to be working on this festival and to interact with these people is something which I feel privileged to do but more because it seems like I was meant to and all that my ancestors worked towards was for me to be there in that space, with those people, in that time, this time. Not only those particular polynesian artists but the team of people who turn up to co ordinate, participate and witness the events.

With my digital camera having been packed before i left, I had every intention of taking many a picture but upon my first few attempts to capture an image it was plain to see justice was not being done so I gave up preferring instead to commit my experiences to memory.

The one image above being so opportunist that I couldn't resist taking it on my phone. It was the time and view and the moon and the...I dunno, sometimes you just don't know why you do it, you just do and and know it's right

The other thing i know is right is that we as people of the sea who populated this land need to reclaim some of it's history, re tell the stories and repopulate the places of those stories in a way that re-interprets the lessons learnt from the past using modern technology yet encompasses all and alienates none and no where is there a better place or platform to do that than in Wanaka in autumn at the Festival of Colour
Posted by pollywog at 4:17 PM